Major solo exhibition Curious Affection by artist Patricia Piccinini has opened exclusively at GOMA showcasing more than 3000 specially created flower sculptures among a range of other immersive artworks. According to QAGOMA Director Chris Saines Curious Affection is the first time a contemporary Australian artist has presented their work at GOMA on such a grand scale. The exhibition will occupy the entire ground floor featuring more than 70 sculptures, photographs, videos, drawings and a number of large-scale installations, including major new commissions.

“Patricia is among the most exciting and challenging contemporary Australian artists working today, this work being the most ambitious to date,” said Saines. The artist is said to be influenced by science, nature, fiction and the unconscious, with her ongoing concern being the social and moral impact of advanced technology on people, animals and the planet. Her fantastical creatures and environments are presented as propositions of possible futures which engage people on an emotional level, as they challenge conventional notions of beauty, perfection, and the ideal.

Through the exhibition, audiences are encouraged to immerse themselves within the work, a place where the conventional boundaries between reality and artifice are unstable. Curator Peter McKay states the exhibition highlights include, Pneutopia, a voluminous inflatable suspended in GOMA’s atrium. The exhibit features Kindred, an orangutan-like mother with two young children and The Couple, a sculpture of a pair in a loving embrace inside an original 1980’s caravan. “Patricia describes the imaginary beings in Curious Affection as almost possible and while they are not always beautiful in the conventional sense, there is a compelling sincerity and dignity about them,” says McKay.

The exhibition opens Saturday 24 April with a keynote address by the artist. Piccinini has also created a variety of other programs for the public to enjoy, including a showcase of science fiction and horror classics and a free Children’s-Art Centre. This exhibition will run until Sunday 5 August 2018. 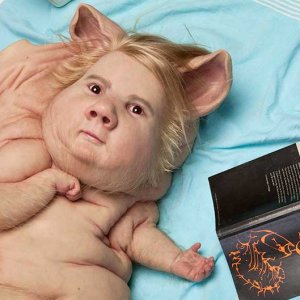 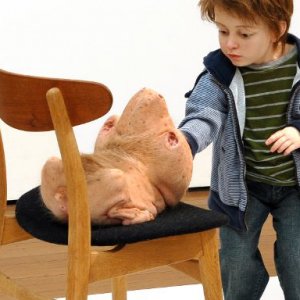 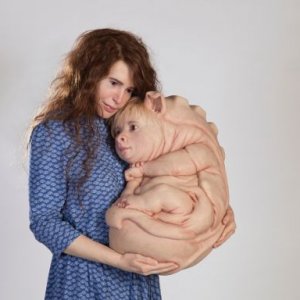