Chef in Residence at Nostimo Restaurant & Bar at West End has added new dish Drunken Greek Prawns to a menu that celebrates classic Greek dishes in a thoroughly modern way.

This is not the only new addition, as he has once again called on his love of Greek literary texts and introduced the Tselementes Mousaka 1910, based on the original 1910 recipe of braised lamb, potato gratin, eggplant and bechamel layers. “This dish is inspired by Nikolaos Tselemetes, a 20th Century revered Greek chef who became famous for combining Greek and French cuisine, he was responsible for showing Greeks how to prepare béchamel sauces, pirozhkies, bouillabaisse sauce and to add vinaigrette to dishes. To this day, Tselementes remains synonymous with Greek cookbooks, and his recipes are passed on from generation to generation,” said David.

Under the culinary eye of Chef Tsirekas, the lamb forequarter is braised in a seasoned lamb rub of tomato paste, olive oil, salt, pepper, crushed garlic, zest and juice of oranges before adding chopped onions, bay leaves, cinnamon and a bunch of thyme. The bechamel sauce is poured on top of layers of potato, eggplant and lamb, with the dish served with a cos lettuce, apple and yoghurt salad.

Back to the Drunken Greek Prawns, Chef Tsirekas serves them marinated in Metaxa Brandy, lime and coconut milk, then deep fried with a light rice flour batter and served with a mango, mint, golden pepper relish and tarama.  “My dishes focus on tradition while still being contemporary and fun, and hero everything that is celebrated about Greek cuisine: produce, quality, seasonality and freshness,” says David.

The new menu dishes are available now at Nostimo Restaurant & Bar, located in the heart of Brisbane’s rich and vibrant Greek community in West End. Nostimo Bar & Restaurant is a stunning modern interpretation of a traditional Greek dining experience. 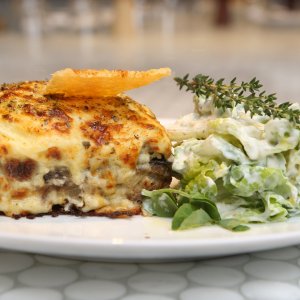 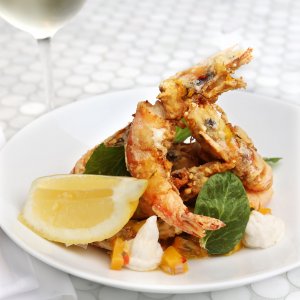 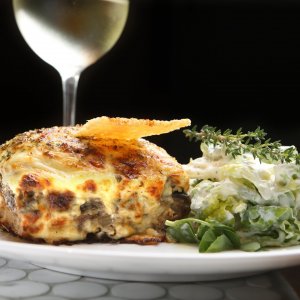