West End Italian restaurant La Lupa has been named in Australia’s top 50 venues in the Annual Wineslinger Awards which celebrate venues where wine is the hero for being served with a sense of fun and adventure.

La Lupa is the work of partners Valentina Vigni, Head Chef, and Andrea Contin, Restaurant Manager and Sommelier. Together, through their passion for carrying on the traditions of their home country, Italy, they have brought to town a little cave of authentic Italian food and unique wines, each personally sourced by the team.

After meeting in London eight years ago, the duo found a shared passion for keeping traditions alive, now across the world in West End, Brisbane. Vigni has always been obsessed with food, she says. Since she was a child, she has filled her house with cooking books she studied to learn techniques and find inspiration for dishes to present to her family and friends. Her life has always been split between art/design, nature and food. After earning her Masters in Business, Vigni left Italy for London to work in marketing, and there she met Andrea Contin.

Contin has worked in hospitality since he was very young. He travelled around Italy, the United Kingdom and Spain working in the trendiest bars. When he moved to Australia, he worked as General Manager for 1889 Enoteca where his passion for wine was ignited and he began studying more about wine’s world regions. During an unexpected trip back to Italy he had the pleasure to start a friendship with a “big man with a huge soul”, Girolamo Michelin.

Contin says Michelin was one of the best wine cellar architects in Europe and introduced him to a whole new world of low intervention wine and producers with smaller production and big hearts. From there, Contin contacted local Italian producers with the aim of bringing their products to Australia. Fast forward two years, and La Lupa for the duo is “a small creature that pretends to show what simplicity and respect for the land is about”.

Its owners describe their dining concept as, “A one of a kind place in which to be able to enjoy unique wines in a casual setting, without the fine dining stiffness that usually is involved with higher end restaurants. A space where you can find authentic Italian food and wines to enjoy often rather than just on special occasions.”

Vigni and Contin would like each customer to “taste the real flavour of each of the ingredients and taste the actual terrier of the wine”. They use raw ingredients, grass fed meat from local suppliers who raise animals with respect in open spaces, and even the eggs come directly from the owners’ very own backyard. The restaurant’s wine list is maintained through Contin’s constant work and research on minimal intervention wines. The list constantly changes and showcases wines mainly from Italy, but also Georgia, Spain, France, Austria, Turkey, Slovenia and Australia too. The list has a total of 150 bottles on the list for customers to enjoy. 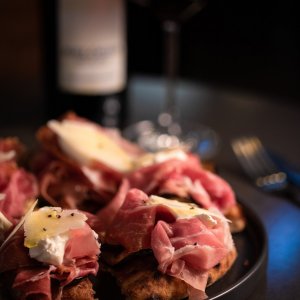 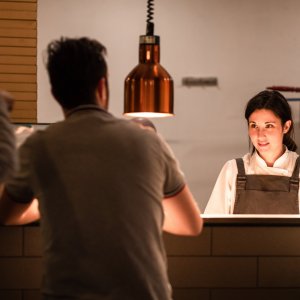 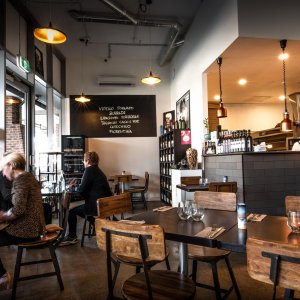