Meanjin based new-wave trio loulou return with brooding new single, Positive Outlooks for the Apocalypse, an urgent and heartfelt ode to possible futures. Facetious, naive and at times optimistic, the single was written from a place of anthropocene related anxiety, and aims to remedy any residual 2020 induced existential dread.

The release comes off the back of a challenging yet rewarding first year for the band, who released two singles from lockdown followed by their debut EP, It Spills Out, a melancholic compilation of catchy guitar-pop which amplifies the band’s washed out contemplative vocals. The debut effort was praised by music media outlets including Laundry Echo, Scenestr and MiMM, and received significant airplay on community radio stations across Australia, charting in both the 4ZZZ Top 10 and AMRAP Metro Charts.

Triple J’s Steph Hughes even had something to say about the new release, “What a charmer, real nice layers in this. Thanks loulou.” Music blogger of Laundry Echo, Dave McCarthy, comments that the single is, “Genuine and genuinely brilliant from start to finish.”

Positive Outlooks for the Apocalypse is available to stream wherever you get your music from 18 January 2021. Loulou can also be caught live at one of their SEQ tour dates below: 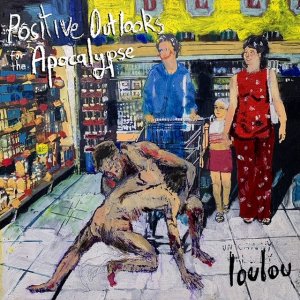 ← Curiocity Brisbane Returning
QPAC back to 100 Per Cent →