Brisbane community members donated $2500 in cash, supermarket gift cards and groceries on Monday 25 June outside the Department of Home Affairs at a donation drive, organised by advocates, for people seeking asylum at risk of homelessness.

The Anglican Dean of Brisbane and chair of the Australian Churches Refugee Taskforce The Very Rev’d Dr Peter Catt said that recent cuts to Status Resolution Support Services (SRSS) is “a new low”, and he called upon community members to ask the government to reinstate the vital income support.

“Deliberately striving to drive people into destitution is a new low for this government,” Dr Catt said. “This decision is affecting children, families and other vulnerable people who fled here seeking safety. The thought of them being cast on to the streets is deeply disturbing … Currently those at risk of being plunged into destitution are being housed, clothed and fed by many people who embody the true spirit of this generous and welcoming land, and I encourage people of goodwill to join this expression of our true national character by offering whatever assistance they can.”

As of Wednesday 27 June, the Federal Government started notifying people that they will be cut off from SRSS financial support. An estimated 1500 people nationally will lose their payments in the next 30 days, with more being impacted as the cuts are rolled out, including torture survivors, pregnant women and families with young children, leaving them at risk of homelessness.

The Refugee Council of Australia has issued a warning that charities and members of the public will bear the brunt of supporting the estimated 7500 people seeking asylum who will no longer be able to pay their bills and rent or afford food and other essentials as a result of the SRSS cuts. Monday’s donations will be given to the scores of people in South East Queensland who no longer receive income support, including SRSS.

Love Makes A Way donation drive organiser Michelle McDonald said that she is worried about the toll that looming income support cuts are already having on people’s physical and emotional health, including that of children. “Advocates are very concerned about the physical, mental and emotional health of the vulnerable people who are facing being cut off from SRSS, with children reportedly ‘acting out’ at school and at home as a result of the increasing stress on their parents,” Ms McDonald said.

“Already stretched charities are scrambling to provide accommodation for people, with many generous community members in Brisbane and Logan opening up their homes to take people in.” 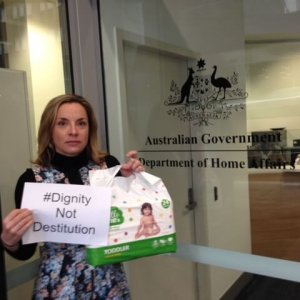 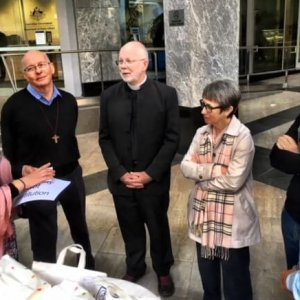 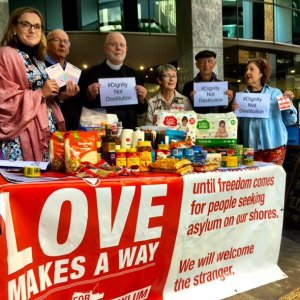 Words by Ashley Hanger
Images via Love Makes a Way