Your mother always said, “don’t run with scissors”, but what did she say about throwing axes?

Rory Swane is holding a tomahawk axe with the tips of his fingers, swinging the chunk of iron in West End’s Lumber Punks. “Have you ever looked at an axe and thought, ‘I really want to throw that?’” He is demonstrating the proper technique to throw an axe, readying his onlookers to hurl the ‘tacticals’ at a target, akin to a game of extreme darts. Rory continues to explain the unlikelihood any of us will hurt ourselves — or each other — rattling off an anecdote about a six-foot tower of a man getting a graze from the wood chips we were standing on.

If you cannot already tell, the Ferry Road warehouse in which Lumber Punks is housed is run by a trio of comedians — literally. Owners Sam Hay and Tyson McMillan met while working at the Gold Coast Hard Rock Café, bonding over a combined love for music. With good mate Rory, they plotted their maiden voyage into the business world, Tyson explaining how slinging cocktails led to slinging axes. “We used to have ‘business meetings’ in my backyard, where we’d sit and have beers and throw tactical axes around. In the end I said, ‘why don’t we just do this?’ I’d been watching the Canadian companies do it for years.”

Axe throwing is essentially a lazy person’s sport. Muscle, ability and coordination does not really play into it — it is about using your body as a machine. The trio opened their first Lumber Punks on the Gold Coast 18 months ago, catching a lucky break for worldwide publicity when Aquaman star Jason Momoa stopped by. “It was kismet, everything just aligned. We went from no notoriety, to people in the US trying to get in touch.” But the newer West End venue trumps the original, with more lanes for throwing, an arcade room for when the shoulders need a break and vintage clothing store.

True to their roots, it is music that unifies the punks hurtling metal at wood, building a community in the back streets of 4101. “Music is something familiar that you know in an unfamiliar place,” says Tyson. “People bring themselves in music, it’s an expression of them.”

But the clientele is surprisingly extensive. “We had a 94-year old throw the other day. She nailed it and loved it. That was the best part — if you break it down into an abstract, what we’re actually selling is not axe throwing. We’re selling self confidence.”

And I can vouch for that. Walking into a warehouse swarming with plaid, picking up an axe — for the first time might I add — lobbing the cleaver chaotically, but hitting with purpose, is absurdly satisfying. It is a little bit naughty, and I am sure my mother would not approve, which is half the charm. But walking out of that woodshed, I could now call myself a punk. 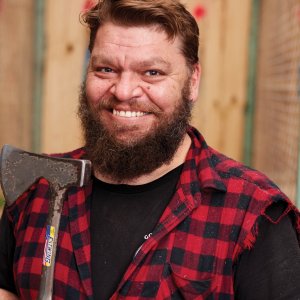 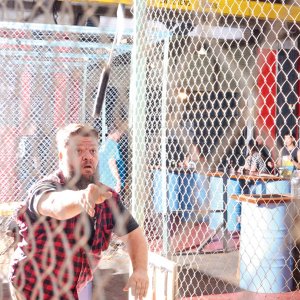 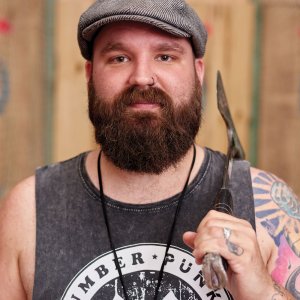 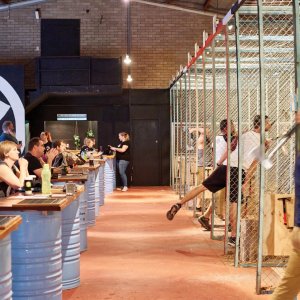 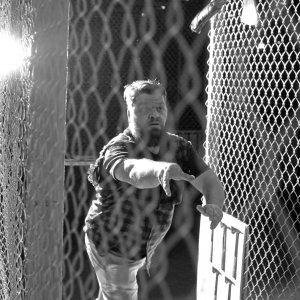 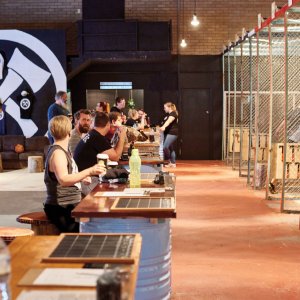