The triumphant stage adaption of Alfred Hitchcock’s North by Northwest has made its Queensland premiere season at Queensland Performing Arts Centre (QPAC). This production is unlike any play I have ever seen, with the dynamic and fast paced production retaining every twist, every thrill, every hairbreadth escape from Hitchcock’s beloved film, in this stunning stage adaptation by director Simon Phillips and playwright Carolyn Burns.

Following sold out seasons in Bath, UK and Toronto, Canada, Hitchcock’s supreme comedy of suspense is live on QPAC’s Lyric Theatre stage. Roger O. Thornhill is a suave and successful advertising executive, abducted by thugs who insist he is a man called George Kaplan. Chaos ensues. When they don’t believe him, that’s infuriating. When they try to kill him, that’s frightening. And when they pin a murder on him, that’s time to run! From New York to South Dakota, Thornhill is chased by spies, Feds, crop-dusting planes and the inevitable cool blonde. North by Northwest is a tale of mistaken identity, confounded and perpetuated by a series of unfortunate events.

The talented cast is led by acclaimed Australian actor Matt Day in the leading role of man on the run, Roger O. Thornhil – a face, who if you are like me, you will recognise but may be unable to place specifically; it seems that Day is ubiquitous in the Australian acting canon. Day’s prowess is matched by the female lead Amber McMahon in the role of Eve Kendall. She is equal parts savvy and oblivious, and matches Day’s stage presence. Queensland Theatre regulars will spot Christen O’Leary in the role of Maggie as well as various other roles, a cast of thousands is portrayed by an ensemble of but a few. The North by Northwest cast also includes Abigail McKern (Mrs Thornhill), Robert Menzies (Professor), Tom Davey (Leonard), Nicholas Bell (Newsreader), Peter Houghton (Gruzinski) Ezra Bix (Budnikov) Leon Cain (Janitor) and Roddy Peters (Bell Boy). Together this ensemble plays more than 30 roles in this highly acclaimed production. Sound quality in the Lyric Theatre is world class–I was convinced a live orchestra was providing the score but was reliably informed by my usher, Joan, that it was indeed a recording. It is nice to see the QPAC staff so knowledgeable about the production and willing to engage in a chat at interval.

This stage adaptation has all the blockbuster special effects of a silver screen movie. Screens behind the stage form part of the set, and at times project real world images. At first, these appear as though they may be borrowed from the original film. An eagle eye will discern their true origins in the wings of the stage. This does not detract from these effects, but does indeed lend them more charm and are greatly appreciated by those audience members savvy enough to spot their lineage.

North by Northwest is now playing at Lyric Theatre, QPAC until Sunday 9 December. Don’t miss this lightning paced thriller that combines glamour with espionage for a truly irresistible cocktail. 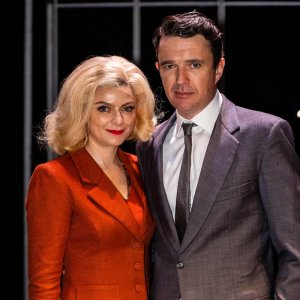 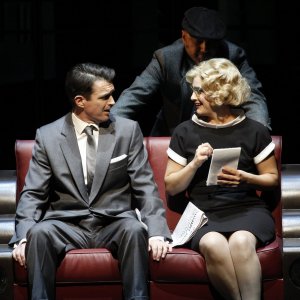 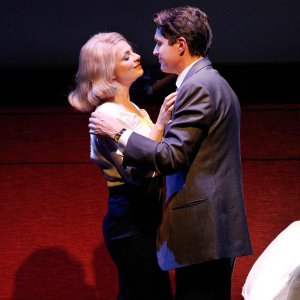