Expected to soar 118 metres high, Brisbane-based ARIA Property Group has submitted a new development application for a residential tower with one of the world’s tallest man-made waterfalls for 77 Hope Street in South Brisbane, designed by Koichi Takada Architects. The landmark project will be delivered alongside a 1500 square metre community park, Brisbane’s first inner-city public park of its size in more than 20 years.

The publicly accessible park will feature subtropical landscaping, feature lighting, seating, public art, and audio integration allowing for public events, festivals and live performances. The park adjoins South Brisbane’s flagship laneway Fish Lane. The laneway recently received the State Award for Urban Design, with the jury noting that the laneway project was “a demonstration of what is possible when once-forgotten city spaces are loved and valued”.

Aria Property Group’s Design Manager Simon White said that the park would deliver significant community benefit, turning an old car park into a safe, dynamic and inclusive open space for all to enjoy. The park will be delivered in two stages with the first stage anticipated to open to the public in May 2019, and the second stage being delivered alongside Aria’s approved residential building on Hope Street. “More than half of the ground floor of the building is also publicly accessible, offering retail amenity, recreation spaces and additional parkland, highlighting our commitment to community activation and delivering the final piece of the Fish Lane puzzle,” said Simon.

Recently approved by Brisbane City Council, the striking architecturally designed building features 216 residential apartments crowned by a water wall cascading from the 50 metre rooftop lap pool. Designed by world-renowned water feature specialists Wet Design, the water wall aptly named Marvel moves down a glass facade, captivating passers-by with its continuous moving texture, accentuated by glistening lights. Spanning the entire height of the building, a thin sheet of water theatrically cascades from the infinity-edge rooftop pool to the ground floor lobby on Hope Street. “It is essentially a series of linked internal and external water walls, running down angled pieces of textured glass to maximise the visual effect while minimising water loss,” said Simon. “Our water wall is specifically designed to ensure the relatively small quantities of water physically stick to the glass panels, emphasising the effect of water slowly falling down the façade of the building. This design is unlike a traditional freefall waterfall or the Chinese skyscraper reported on recently which appears to have thousands of litres of water continuously gushing out horizontally, spilling into the streets or evaporating into the atmosphere.”

Despite the proposed water wall operating for 18 hours a day and regardless of weather conditions, the power usage is estimated to be a fraction of the Chinese example as the quantity of water being pumped vertically is less than 250 litres per cycle which requires small and low power usage pumps. The water will be harvested from rainwater and stored in a rooftop water tank where it will be recirculated continuously through the system, with no town water required.

A national Design Competition for the project was awarded to Koichi Takada Architects with the winning design drawing inspiration from Queensland’s rainforests and sub-tropical climate and embracing BCC’s ‘Buildings that Breathe’ guidelines. The concept also boasts endless hanging gardens and overflowing planters that flow down the sides of the building. 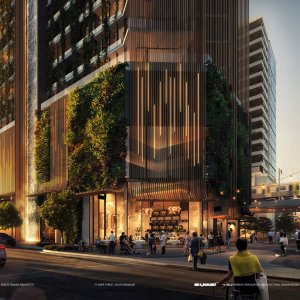 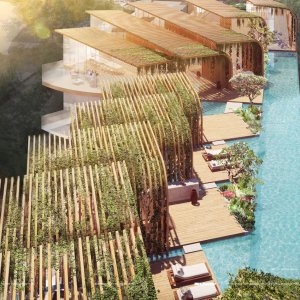 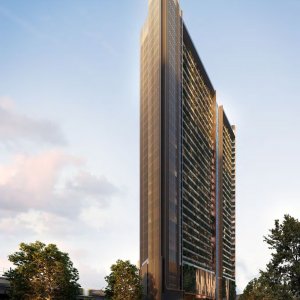